2015 in review – a pawtastic year at Hawai`i Doggie Bakery!

What a year 2015 has been for us!  This has truly been the most exciting year that we’ve had since we became new owners of Hawai`i Doggie Bakery 4 years ago.  From new customers and partnerships, creative doggie birthday parties and even winning an award — we’ve really had a fun and fulfilling year!  In celebration, we’re taking a look back at some of the highlights of 2015.

Our 2015 started off with a BANG as we entered the American Small Business Championship, a national competition for Small Businesses sponsored by SCORE and Sam’s Club.  We were a last minute entry, but we were able to garner over 11,000 votes and ended up being selected as one of two representatives from Hawaii!  Winning this award right at the beginning of the year and the subsequent winner’s trip to Phoenix really set the tone for us as we embraced our “official title” as Champions! 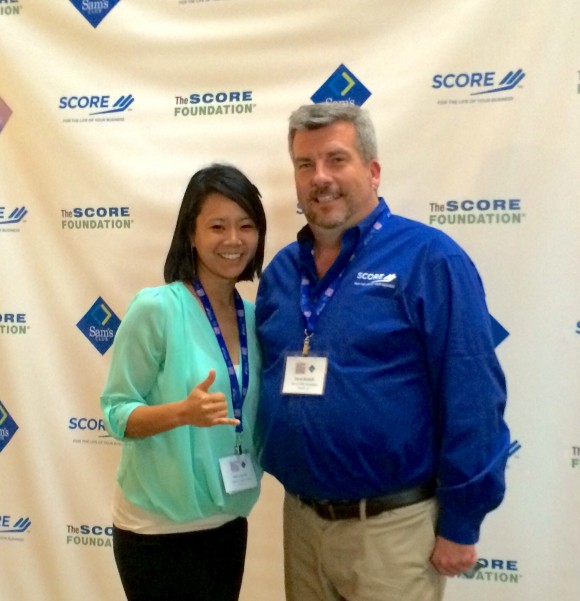 2015 was also a banner year for Doggie Birthdays at Hawai`i Doggie Bakery!  We started our Doggie Birthday Club in January and by the end of the year almost 900 dogs became part of this pawesome club! All dogs who signed up for Birthday Club received a special birthday message and free bag of biscuits on their birthday.

A lot of dogs came to our shop to celebrate and it was so fun to see so owners come in to make their doggie’s day special whether it was with a biscuit, Giant Sweet Potato Pupcake personalized with their name, a Classic Pawty cake or even a Specialty Theme cake!

In total, we helped over 250 dogs celebrate their birthdays with Classic Pawty Cakes and Specialty Themes.  675  Dogs had smaller celebrations with Giant Sweet Potato Pupcakes personalized with their names (and sometimes with the names of their guests too!)
We’ll be posting about the Specialty Cakes pictured in this video later — it’s been a busy year, but we’re planning to blog about all of them SOON!

One of the best things about having a doggie bakery (besides all our adorable furry customers, of course!) is getting to dream up different goddies to celebrate the many holidays throughout the year!  It’s especially exciting in Hawaii since we have so many different cultural traditions to celebrate as well.

This year we were busy in the kitchen baking up returning favorites like Doggie Growlin’ Gau, Girl’s Day Mochi and Thanksgiving Pumpkin-n-Poi pies.  We dreamed up new treats for 2015 like our Rainbow Bones, Zombie Woof-pocalypse Biscuits and Mother’s Day Bouquets! 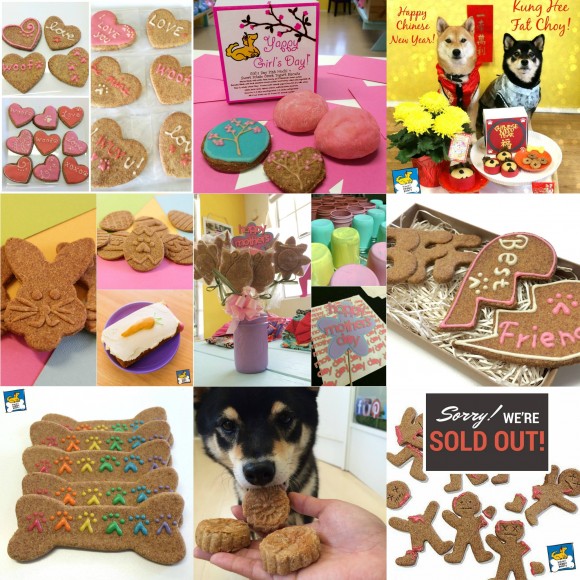 Our shop was hopping with excitement this year as we hosted a number of different events for dogs and their owners! 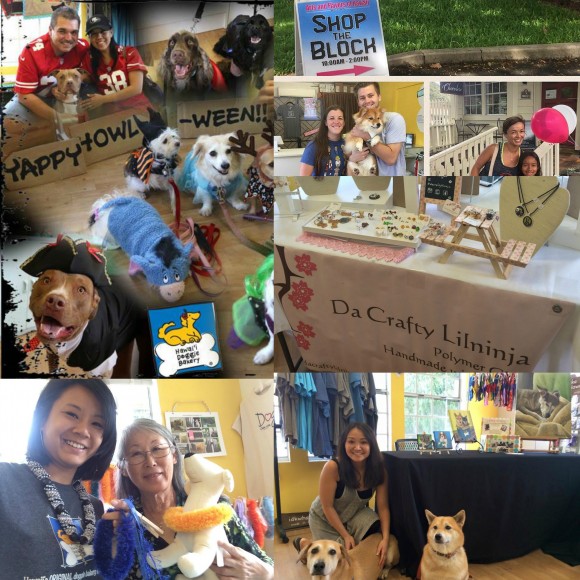 For May Day, we welcomed our Doggie Lei maker, Eileen from Mana’o I’o to to showcase her beautiful doggie leis.

In the summer we partnered Arts and Flavors Hawaii for Shop the Block Manoa and hosted Pualani Soap for the day.  Towards the end of the year we held a couple of pop-up events and welcomed Michele Muta (artist), and Da Crafty Lilninja (polymer clay artist)!
Our two biggest shop events of the year of course were Doggie Trick or Treating and Manoa Small Business Saturday!

We also were out and about this year at a number of different craft fairs, pet related events and other fun stuff!  Too many to name, but our biggest of course were the Hawaii Pet Expo and Made in Hawaii Festival!

In the midst of all our exciting treats and events, it was thrilling each time we got a call to be featured on TV, online or in print!  We are so grateful to have been featured in so many different media publications and making appearances on TV this year.

We started off the year with a stunning feature in Otonano Hawaii – our first International Magazine coverage since becoming new owners. 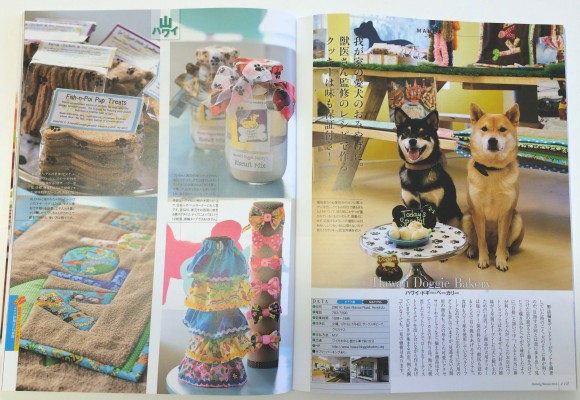 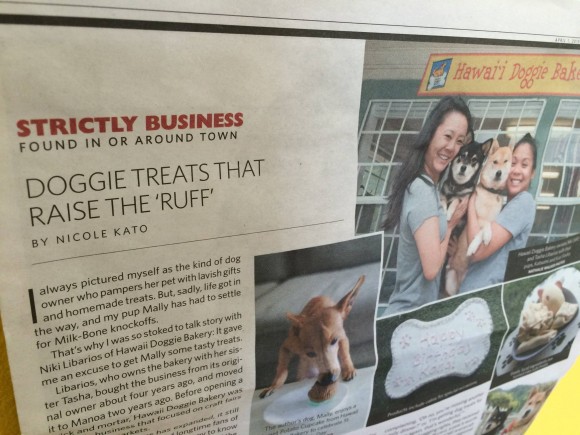 We appeared on KITV twice with Ashley Moser to promote our May Day is Lei Day event for dogs as well as our Trick or Treat for dogs event! 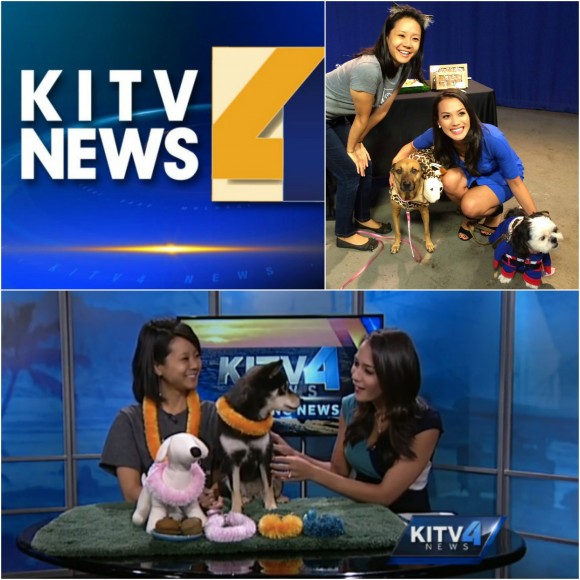 During the summer, Yelp gave us a shout out in their Weekly Yelp and Co-Owner Niki was really excited to be a featured guest on her very first podcast: Hawaii Business Podcast!

After partnering with our Manoa neighbors to create Manoa Small Business Saturday, we were so excited to get a lot of press coverage which helped us create a very successful event!  In print, Nicole Kato from Metro HNL gave us a special feature and Erika Engle from Star Advertiser featured us in her “Buy Local” column.  Hawaii News Now came down for day-of coverage (and we were even the TOP STORY on the front page for a few hours!).

And our last two features of the year were from Catherine Toth on Honolulu Magazine who included us on her 2015 list of 5 Christmas Treats your Pets will love and our very first LIVE cooking demo on Living808!

With all of these wonderful things that happened to us this year, we also made sure to give back to our community as well.

We continued our family tradition of helping out at the Hawaiian Humane Society’s Black Tie Fundraiser, Tuxes and Tails, as well as donating a Doggie Party Package to their Silent Auction.

We had fun attending Poi Dogs and Popoki‘s West Oahu Pet Walk as well as donating a prize basket and biscuits to every dog who registered!

On the same day as the West Oahu Pet Walk was the Hawaii Pet Blessing Festival, so we couldn’t attend, but we made sure to donate biscuits to add to the festivities!

In October we helped Fur-Angel Foundation celebrate their first birthday with a paw-ty cake!

During the holidays we were so excited to have our very first K9 Kokua Lokahi Tree!  We are proud to announce that in our first year we raised a record a $600 and in-kind donations thanks to our amazing customers and folks who stopped in just for the tree!  Thanks to all of you, K9 Kokua says our location raised the most money out any donation box all year!!! 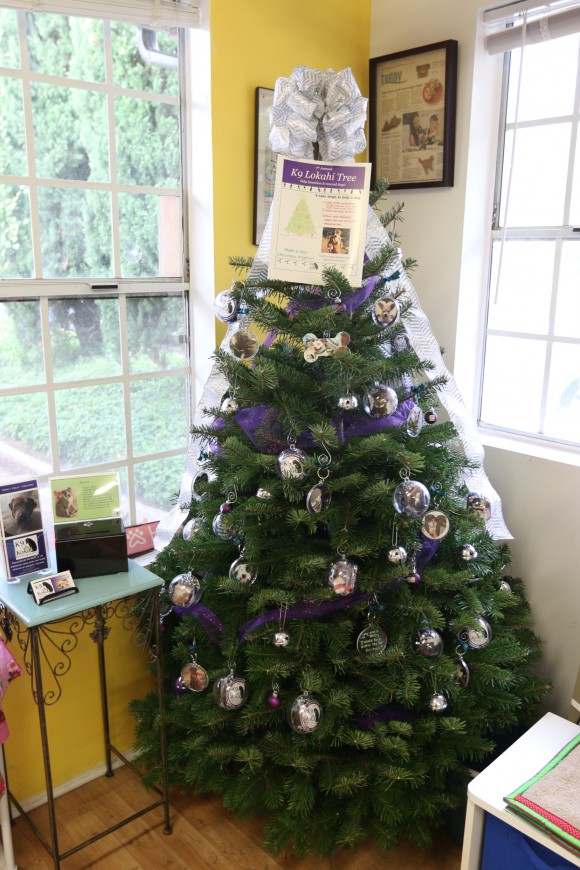 Last but not least, we attended and passed out biscuits to all the registered dogs who visited our booth at Make a Wish Hawaii’s Jingle Rock Run!

What an amazing exciting year we had!  We hope you enjoyed reading this post as much as we enjoyed writing it and enjoying the memories of everything that happened.  Thank you to everyone who came along with us on the journey – it was pawsome to continue along with old friends and make so many new ones too!  Looking forward to 2016.  What is in store for us?  We can’t wait to see!!

PS. One more random thing…we also learned that WOLVES like our treats!  Whaat?  Too cool!!! WOOF!